skip to main | skip to sidebar

Hey there,
Here is a BIG UPDATE!!

Over the last few years i have been so on and off with everything to do with competing, working out, quitting the lifestyle all together...then starting it again and wondering why/what am i doing??!! I prepped for a couple shows, never making it all the way through and it left me with a lot of feelings of guilt and really, embarrassment for not following through with it all. I really have had a lot of self doubt the last couple years that i could even do it anymore- i felt like i lost it somewhere. It made me sad, but i thought 'oh i just need to move on already!"

So anyhoo, back in the summer of 2010 i had then decided that really didn't like the way i looked anymore and that i felt so much better about myself when i was smaller and leaned down- so i decided i needed to try to just get smaller! Because before, when i'd put on any weight i was just huge when adding any fat on top of all that muscle, so i knew i needed to try to trim down muscle too. A year and a half ago was the last time i lifted a heavy weight or ate 6oz of protein at once lol. Slowly, i adjusted the way i was working out- i added more cardio and lifted really light. I changed my eating and cut my protein in half or more. BUT despite these efforts, it was and is not as easy as people make it out to be! I've heard some say, 'just stop lifting heavy and eat less protein etc and u will get smaller- NOT SO at all with me!! I have lost some size for sure, but it is only more recently that i am seeing more significant results with the downsizing. Now, don't get me wrong, i didn't want nor do want now to get really small!! I just want to trim down 'some'.

So over the last while i have been just really enjoying being and feeling so healthy! I had been eating what i wanted- but in more moderation and just feeling unrestricted. Feeling so good, and kinda realizing i really didn't want to ever compete again in bodybuilding. BUT that passion, that fire inside me just could not just die, i could not stop wanting to what makes me feel so much passion and strength and most of all - stand on an IFBB pro stage!!!

I had decided to downsize before they had even announced a new division...and as soon as I heard the news of a new 'PHYSIQUE" division my mind got thinking!! "Physique was announced to be the newest addition to the women's classes- a division that is between bodybuilding and figure, sounds like exactly like what i envision for myself!! But i still didn't know if i wanted to try to get back into competing again. I just thought i wanted to move on to other things and forget about competing. So, i tucked that thought in the back on my mind and continued on, but i kept thinking about it, kept wondering about it, and just couldn't let it go as much as i thought i wanted to. And so i decided i HAVE to do it! Now is the time to follow a dream, to stand amongst the best physique people in he world on a professional stage! Not many people can say that, not many people have been so fortunate to get a PRO card, and i was so fortunate to have- and i would forever regret not presenting myself and competing as a PRO! IT is a blessing and i am so excited to compete as a pro, what an honour! I know there are many people who forever dream of becoming an IFBB PRO and never ever get there- and i know that its a gift and i should use it!

SO....I am planning on competing in my first pro show and in the new physique division at the 2012 IFBB EUROPA in ORLANDO FLORIDA- April 27/28. I am currently 16 weeks out! I am excited!! Now, I know some of you are thinking what am i doing- as you and I both know that my body is prob more apt to do bodybuilding- i have round, full muscle bellies and i have had a heck of a time trying to trim it down! BUT, i feel better smaller and like the way i look already so much better! I have managed to get my physique down some finally and I'm so excited to see my body continue to change and transform over the next 16 weeks. I know from what they've been picking in this division thus far, that they are leaning towards the smaller side with the girls- and it def leans wayyyy more towards a figure look than a bodybuilding one. But i am going to try not to let that deter me, as i will just do what i can and come in the best that i can. I mean i really don't wana get crazy small anyways, i just wana continue trimming down and get my physique to place that looks really healthy and pretty without looking too bodybuilder like. BUT listen, bodybuilding is MY ROOTS and i am not at all saying bodybuilding is no good! I LOVE bodybuilding and will forever, i just personally want my body to be a bit smaller. And really, most people who see me likely think i'm a bodybuilder!! And i am, i'm just tryin to be a lil smaller one :)

I will tell you this without a doubt- this is the HARDEST thing i have ever done already! I have NEVER worked so hard and busted my ass so much. In order to try to get smaller and leaner- i have been doing tons high intensity cardio (6 days per week) and my workouts consist of just 3 per week of full body circuits- even though i lift LIGHT- i friggin work so hard! I can tell you lifting heavy weights and doing slow cardio is SO EASY compared to doing plyometric workouts and super high intensity stuff all the time. Plus, i only eat 2oz of meat at a time when i eat now- i had been eating 3oz all year but now its down to 2! dont worry, that's not all i eat!! LOL. I eat lots of other carbs and fats, including fruits etc- and i eat a lot of times per day but super small amounts and lower protein than normal. 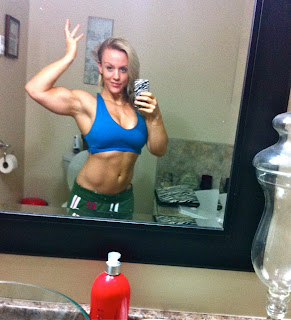 Currently i am right at 140lbs. I really don't know what i will compete at but to guess, i think I'd like to be around 115lbs. When i did bodybuilding, i would be prob 155 or so at 16 weeks out for comparison- and i competed at around 127.
That is my news! i will share in the exciting journey with you! I will do progress pics and video updates for the members area too.

Promote Your Page Too

Cindy Phillips
IFBB Professional Bodybuilder. Please email me with your comments and questions. My blog is updated regularly for MY FANS! Love you all so much, this BLOG is for you!